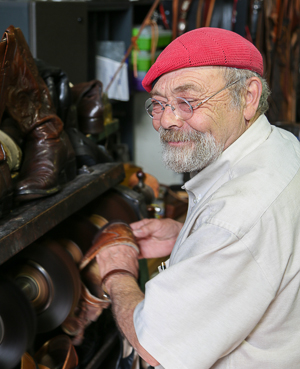 If you’ve stopped at the distillery and saw or spoke with a gentleman in a beret and a super-friendly service dog named Alice you’ve met our friend Felix Bendler. Felix has a small leather business in the building next to the distillery. He also has the unusual distinction of being a man without a country. Now, the country he has resided in since infancy and has paid taxes in as an employee and as a business owner, has cut off his social security benefits.
Great Lakes Distillery is hosting a fund raiser for Felix on Sunday June 26th to help defray his legal costs as he continues his fight against the US Government. How did he get in this situation?
Felix, the son of a concentration camp survivor was born in a displaced persons camp after World War Two.  As such he wasn’t a citizen of Germany and when his parents moved to the US they did not issue him US citizenship. As a high school student in Milwaukee in 1967 he got into a bit of trouble for selling $25 worth of marijuana to an undercover officer. Sentenced to four years in prison Felix served two years and was released. Unfortunately because he was now a felon and not a citizen of the US, the federal government issued a deportation order. Fortunately because he had no citizenship in any other country the US has been unable to find a country to deport him to.

Despite a pardon for his crime from two Wisconsin governors the deportation order still stands to this day. As such, Felix’s life has been made difficult. A recent stroke has limited his ability to work full time and the government has canceled his social security payments due to the deportation order. This and his mounting legal costs have severely limited his income.

Felix has been quiet about his story in recent years as he quietly worked behind the scenes trying to solve his problem, but it wasn’t always that way and he feels he no longer has anything more to lose. In the 1970’s his story was made known all over. It had been told by numerous media outlets including the New York Times and by Roger Mudd on the CBS Evening News (news items link here). Unfortunately this did not help his situation and today he finds himself in even greater need of help.
Great Lakes Distillery is hosting a fund raiser for Felix on Sunday June 26th from 2-6PM to help defray his legal costs as he continues his fight against the US Government. A portion of the tasting room sales will be donated and there will be a silent auction and a pot-luck so feel free to bring a dish to share. Alice will be there too.
From Felix- “You can donate to my cause by mailing a check made out to Sarah Blackwell, and mail it to her at: 700 West Virginia Street, Suite 307, Milwaukee, WI 53204. Sarah is my defense lawyer, and she has been working pro bono for years, but my case is going to take a lot more additional research. Sarah will be at the event to address that and explain why my case is uniquely complicated”